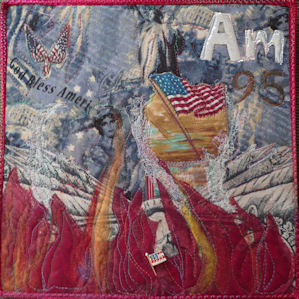 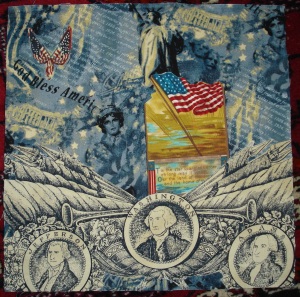 Americium, a “rare earth”, was first by produced and identified by Glenn Seaborg at University of California, Berkeley laboratory in 1944. Not created by nature, Americium is found in concentrated areas near now-defunct nuclear weapons testing grounds and at the sites of nuclear incidents such as Chernobyl and Three Mile Island.

Americium is the only synthetic element that you can buy at the hardware store where it is found in smoke detectors. It is very effective in this role because just 0.28 micrograms generates enough radiation to provide a constant current that flows between two tiny electrodes in the smoke detector ionization chamber. Smoke entering the chamber reduces the ionization and interrupts the current, setting off the alarm.This commercial use of the highly radioactive element is deemed safe because any alpha particles can be blocked by thin layers of common metal fabrication materials.

Since it is named after our country, my interpretation began with images that resonate as “American” such as the flag, Lady Liberty, fireworks, the White House and a red, white and blue color scheme. Those images seem to be under threat by the transparent red organza flames and the hand-dyed wool roving and cheese cloth smoke. However, as memorialized in song, the star spangled banner is undaunted and “yet waves.”