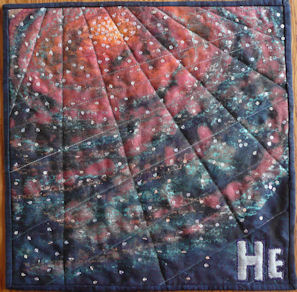 I pouted when I got helium. Balloons – boring. Blimps – yawn. What else could I use as an image to communicate the properties of helium? Lighter than air is tough as a visual image. So I did a little digging. Helium heads up the noble gas group on the table. It has the lowest boiling and melting points of any element. While rare on earth, it makes up 24% of the mass in our galaxy, second only to hydrogen – bingo! There’s my image. The idea that space is full of helium triggered my love of the enhanced space images from the Hubble telescope. 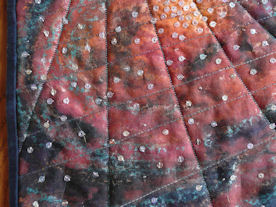 This close-up shows the design created by first discharging, then painting, dyeing, and embellishing what was originally a solid navy fabric. As the image grew, I loved it more and more. The last step after quilting was to throw a spangle of sparkling sequin stars across the firmament.

One thought on “Helium”