When I asked my husband the physicist to describe plutonium, he said, “Plutonium gives birth to many other elements,” which struck me as a rather poetic way to describe something so deadly. Intrigued by the birthing image, I searched for images of birthing and quickly realized that most would be inappropriate for a younger viewing audience. I was, however, struck by the beautiful mandalas I found, and their similarity to circular images portraying the nuclear fission process, and thus the circular image used. Inward stitched arrows portray the fission process, the small arrows pointing outwards represent the energy released, and the flowers around the edge symbolize the 18 elements created through the fission process. By using both blue, which is associated with water and life, and black, which is associated with death, I hope to capture tension between creation and destruction. 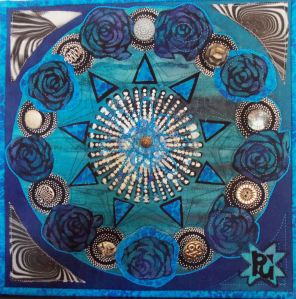