“Krypton” and “cryptogram” come from the same root word. You can solve this cryptogram easily to learn who discovered the element. For each letter, substitute the one that comes just before it in the alphabet.

I chose the fabric because krypton has a spectral signature in green:

It looks like simple addition: 28 plus 82 = 110. If you had a heavy ion accelerator such as the one at GSI in Darmstadt, Germany, you could bombard a lead target (Pb 82) with nickel ions (Ni 28) moving at 10% of light speed, and perhaps create 3 atoms of element 110. Even if you managed it, the new element would be gone before you could shout “eureka!” But the IUPAC might still allow you to name it for your hometown: Darmstadtium.

I just discovered a You Tube video from Darmstadt illustrating this! Take a look! 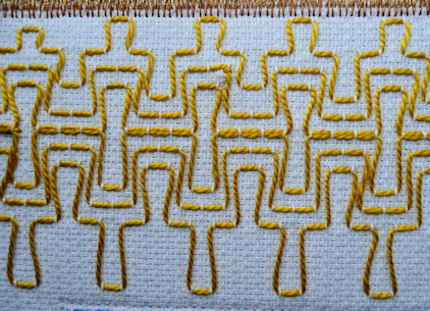 Ytterbium is named for the Swedish island of Ytterby, where this and several other rare earth elements were discovered in ore from a quarry.* It’s one of the few places where very old rocks are found near the surface.

I chose to do some Swedish huck weaving, which is actually a form of embroidery done on a special fabric. (read about it here) The block features Swedish yellow and blue, and should cheer up this corner of the Periodic Table!

*the others are erbium, terbium and yttrium

This rare earth is very rare on earth, but surprisingly common in moon rocks. 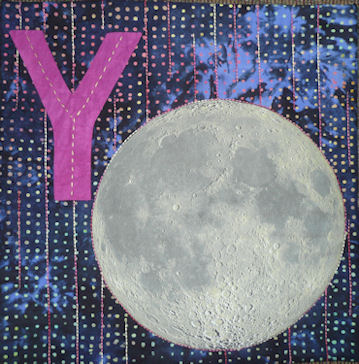 Silicon makes up 27% of the earth’s crust. We find lots of uses for it, but what intrigued me is what diatoms do with it.

Diatoms are single-celled algae, part of the oceans’ collection of plankton. They make a cell wall (called a frustule) from hydrated silicon dioxide. It is estimated that there are more than 100,000 species of diatoms in both salt and fresh water.

My quilt depicts two diatoms: a small one that I discharged with bleach, and a larger one that is completely embroidered.

More embroidery than I ever want to do again! 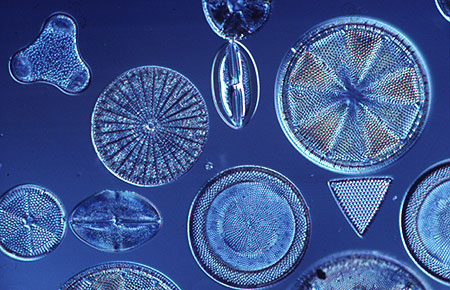 Glenn Seaborg (1912-1999) was a chemist and winner of the Nobel prize. He discovered, or helped to discover, 10 elements, including number 106, which is named for him.

Seaborg was a professor at the University of California, Berkeley. He also served as Chair of the US Atomic Energy Commission. He worked on the Manahattan Project, where he developed the extraction process used to isolate plutonium fuel for the second atomic bomb.

In 1980, he transmuted bismuth into gold, fulfilling the dream of alchemists throughout history. The technique is too expensive to be commercially viable.

He was also a pioneer of nuclear medicine. He considered his own biggest accomplishment to be his work on the Limited Test Ban Treaty. He influenced President Johnson’s administration to pursue the Nuclear Non-Proliferation Treaty.

Seaburg’s family name was originally Sjöberg, yet another connection between Sweden and the periodic table. Holmium is named for Stockholm, and four elements were discovered on the Swedish isle of Ytterby: Ytterbium, Erbium, Terbium and Yttrium. Johan Gadolin, who discovered Yttrium, was a Finn when Finland belonged to Sweden. Gadolinium is named for him. Cobalt and oxygen were both first recognized as elements in Sweden. Lise Meitner, part of the team that discovered nuclear fission, was born in Austria but lived and worked in Sweden. Meitnerium is named for her. Then of course there is Nobellium, named for another Swedish chemist. Also consider Thorium (after a Norse god) and Scandium, named for Scandinavia. Vanadium is a name from Norse mythology, and Tungsten comes from the Swedish for “heavy stone.”

Thorium is named for Thor, the god of thunder. Thor’s magic hammer is Mjolnir. 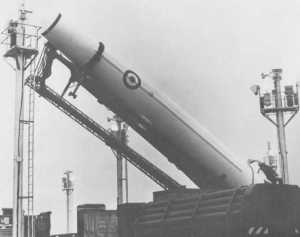 One of the rare earths, neodymium makes a VERY strong magnet. It’s also used in lenses, where it causes a magenta cast. Because of the abbreviation, I couldn’t resist representing the magenta with a map of ND.

According to the International Union of Pure and Applied Chemistry,  “Elements with atomic numbers 112 and above have been reported but not fully authenticated.”

Actually, they need to update: 112 is now Copernecium.

My table shows them on the bottom row, labeled ununtrium, ununquadium, etc. through ununoctium. Basically, “no name 13” through “no name18.”

I chose to represent them with a series of hand-dyed solids, graded from light through dark, featuring only the atomic numbers. 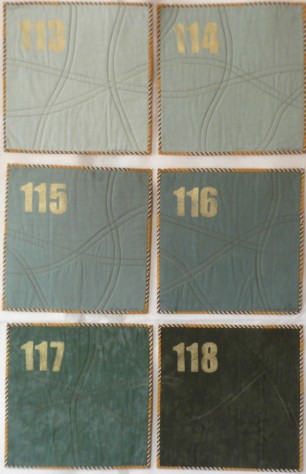 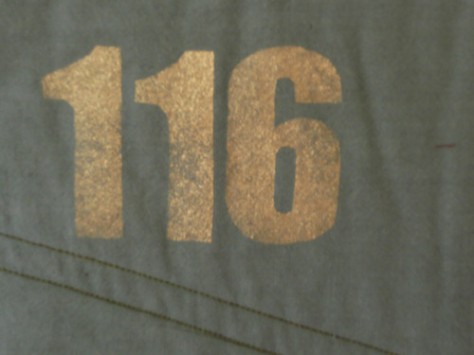 114 may eventually be named for Japan--if so, I am ready with an addition!

Being a word lover, I ‘m always interested in where the names come from. Nickel (little Nick) was the name of a mountain spirit in Germany. He lived in the copper mines, and sometimes played tricks on the miners. For instance, some copper ore would not yield any copper, so the miners blamed that on the spirit and called it “nickel copper.”

Eventually, another metal was found in that ore, and of course, it became nickel.