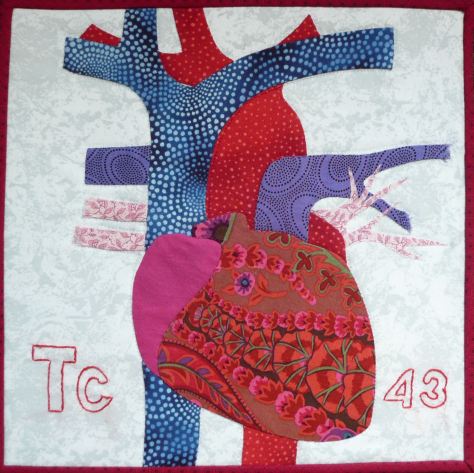 Technetium is employed in over half of all nuclear medicine procedures.Technetium-99m is used to image the skeleton and organs, the heart muscle in particular. Myocardial Perfusion Imaging (MPI) uses technetium for detection and prognosis of coronary artery disease.

Isolated in 1937, Technetium was the first man-made element. It’s produced by bombarding molybdenum-98 with neutrons. 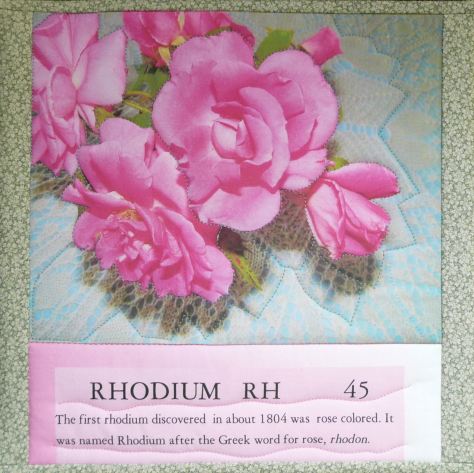 Rhodium was discovered by William Hyde Wollaston, an English chemist, in 1804.The first rhodium was rose colored so it was named after the Greek word for rose, rhodon.

Rhodium is usually obtained as a by-product of mining and refining platinum. It’s used to make electrical contacts, in jewelry and catalytic converters. Its main use is as an alloying agent in other materials such as platinum and palladium. Rhodium is the rarest of all non-radioactive metals on Earth. 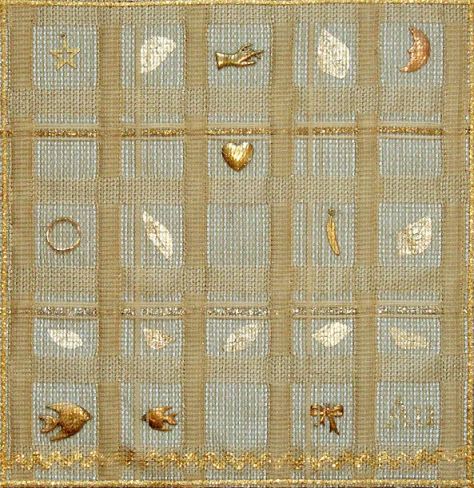 Gold has a lattice face centered cubic crystal structure. It is a tasteless, odorless, dense metal that is the most malleable of metals. One ounce can be pounded into a 300 square foot sheet. It is used in dentistry, electronics, wiring, pharmaceuticals and jewelry.

It is the Gold Standard. 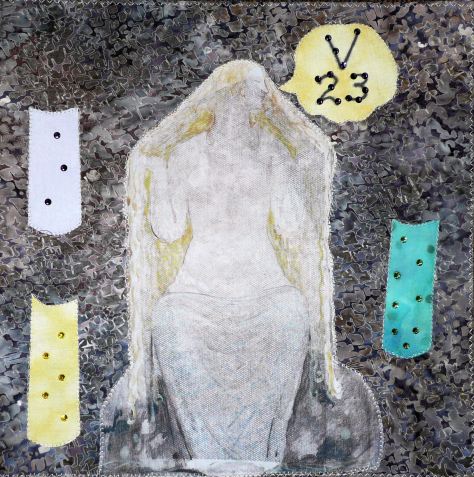 Named for the Scandinavian goddess of beauty and fertility, Vanadis (Freya).

Vanadium a was first discovered in 1801 by a Mexican scientist who later withdrew his claim, and later rediscovered by Nils Gabriel Sefstrom, a Swedish chemist in 1830. It is sometimes used to make special tubes and pipes for the chemical industry. Vanadium penotxide is its most useful compound.  It is used as a mordant which permanently fixes dyes to fabrics.A silk portrait of the goddess is machine appliquéd over the multi hued background of grey, the test tubes show the various colors achieved as it decays. 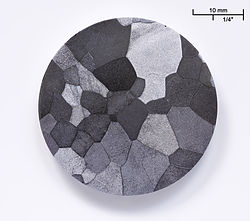 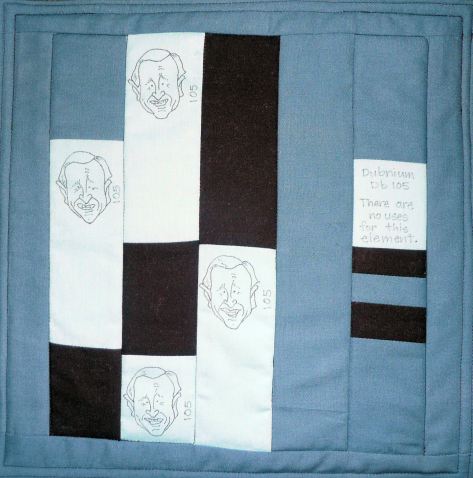 There are no uses for this element. 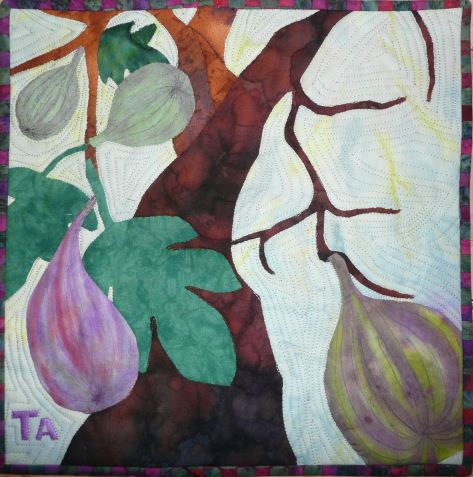 Tantalum is a rare, lustrous, blue-grey metal used as a substitute for platinum in alloys, but its main use is in capacitors used in everything from cell phones to computers. Tantalum is wonderfully chemically inert and does not absorb chemical solutions even when submerged. This characteristic led its discoverer to name it after Tantalus, a figure in Greek mythology who was punished by the gods to spend eternity submerged to the chin in water which would drain away if he tried to drink and tantalised (tantalise=Tantalus, get it?) by ripe figs hanging just above his head which would be blown out of reach if he tried to take one. Horrible fate to spend eternity suffering from unending hunger and thirst, but then Tantalus was a pretty horrible guy. He stole ambrosia from the gods and in exchange, served them dinner he concocted by sacrificing and boiling up his son Pelops. Ugh.

In its natural form, tantalum always occurs with niobium, named after his daughter (who wasn’t much better than her father by all accounts). 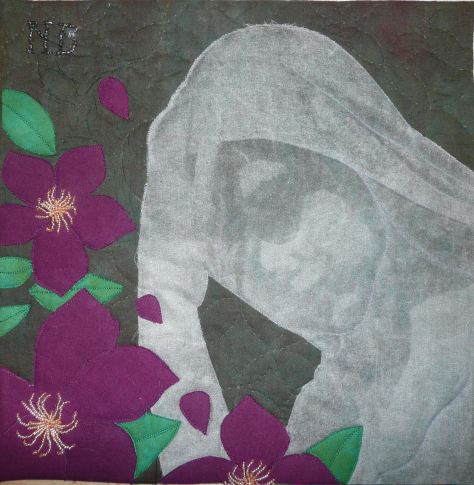 This element is a rare metal that has many characteristics similar to tantalum and the two always appear together. In fact they are so similar, it is difficult to distinguish one from the other. It was first discovered in 1734 and named columbium by Connecticut governor John Winthrop the Younger. However, because chemists of the time were unable to isolate it from tantalum, they decided it wasn’t an element after all. It was rediscovered in 1844 by Heinrich Rose. Apparently Rose must have been feeling puckish the day he officially named this element, as he decided to change the name from columbium to niobium — making niobium and its close relative tantalum the only father-daughter combination on the periodic table.

In junior high, I developed a fascination with Greek and Roman mythology that continues to this day. I don’t know why because these stories are pretty ghastly. The gods are not nice, people.

The myth of Niobe is particularly beastly. She was the daughter of Tantalus and queen of Thebes. She was a beautiful, proud and fecund woman who you would think would have know better after what happened to her father. At a celebration to honor the demigoddess Lantona, mother of gods Apollo and Diana, she sashayed in to the temple and announced that people were wasting their time worshiping such a weak goddess. Wasn’t she more beautiful? Wasn’t she richer? Wasn’t she more fertile? After all, she had seven sons and seven daughters instead of only one. Why were they wasting their time worshiping such a puny little person? Apparently the Thebans couldn’t think of a good reason so they left the temple with the ceremony unfinished.

Of course, the gods did what the gods do — they smote her. Each of her children died a horrible death at the hands of Apollo and Diana, until Niobe desolate and immobile with grief, turned to stone.

The moral of the story is, don’t mess with the gods. I’m just saying. 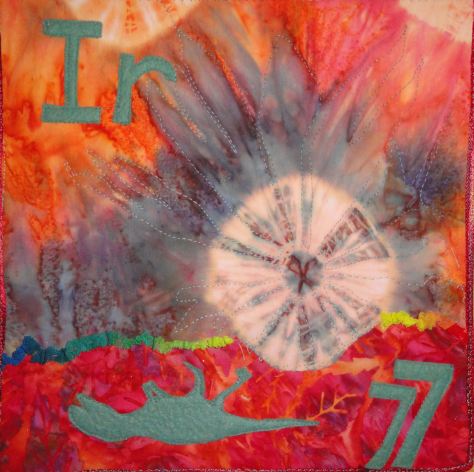 Iridium is one of the rarest elements in the Earth’s crust. An unusually high concentration of iridium in a geologic layer led to the theory that a huge  asteroid wiped out the dinosaurs 65 million years ago and deposited a thin layer of iridium-rich clay around the globe. This layer now marks the boundary between the Cretaceous and Tertiary periods of time.

Multi-colored in its crystalline form, iridium is named after Iris, the Greek Goddess of the Earth and Sky, personified by the rainbow. 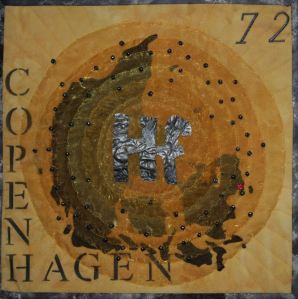 Depicted on the quilt is a shell model of the electron rings with 2, 8, 18, 32, 10 and 2 electrons represented by beads. The silhouette under the organza rings is a map of Denmark, with Copenhagen marked by a red star. The gray Hf represents what the metal looks like. 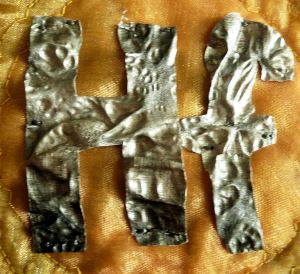 Hafnium, atomic number 72, was discovered in 1923 by Dirk Coster and Georg C. von Hevesy. It was named for the Latin name for Copenhagen where is was discovered: Hafnia.

It is a lustrous, silvery ductile metal, one of the transition metals on the periodic table. Low abundance and difficult separation technique make it scarce. Most is used in production of control rods for nuclear reactors.

Manganese was discovered in 1774 by Johann Gahn and was named from the Latin mangnes, meaning magnet. This common compound is a very hard and brittle metal that is used in the production of iron, stainless steel and aluminum alloys. My depiction of Mn represents the manganese dendrites, also called pseudo-fossils, which form when manganese oxide crystallizes on rock surfaces in branching patterns. I applied metallic fabric paint on a gelatin mold and used arborvitae branches as a resist on black silk to create the design and then cut out the piece in the shape of one of my favorite states, Minnesota. 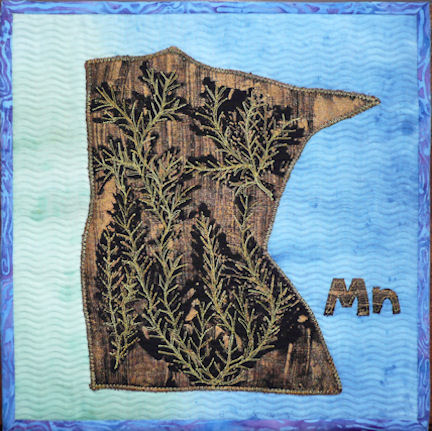