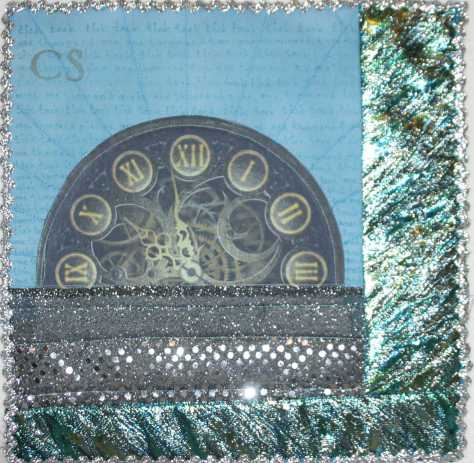 This soft, silver-gold metal has a melting point of 82 degrees F, which makes it one of 5 metals that are liquid near room temperature. One of its distinguishing characteristics is the brilliant sky-blue it emits when burned.

Cesium also decays at an exceptionally stable rate; therefore when the scientists of the world decided to regularize our timekeeping, they turned to cesium. In early definitions, the length of a second was based on calculating fractions of the apparent motion of the earth and sun which they found meant that a second is not always a second–sometimes it’s longer, sometimes it’s shorter. That’s no way to run a universe. So in 1967, the International Bureau of Weights and Measures used an isotope of cesium to help define an unequivocal second: “the duration of 9,192,631,770 periods of the radiation corresponding to the transition between the two hyperfine levels of the ground state of the caesium 133 atom.”

Cesium is used in atomic clocks. In this piece, I depicted an atomic clock with a kind of steam punk esthetic.